Galway County Council  organised a project update and presentation to the key community stakeholders on Nov 9th.   There are positives and negatives. In general SGFRC is happy with the team work, the professionalism and world-class expertise being brought to the fore here but concerned over environmental risks and the impact of 8-10 month delays due to project complexity.

However, the following are the key concerns

Data collection for the study area ongoing and large bank of information has been collected and reviewed.

Public Consultation held on 3rd May 2018 in Gort. The two main themes emerging from the public consultation included

Based on feedback from Public Consultation, the following has been completed:

Notes : For Ballylee,  reduction of 2 M will not provide full protection for Ballylee Castle,  it doesn’t seem possible to physically reduce that level of water levels down fully. However they can be reduced to an acceptable level and with barriers to protect the doorways, it’s possible to manage the flooding. (Barriers have kept out rising levels recently)

Rita reassured the group that her and Mott MacDonald’s role here is not to be the environmental nay-sayers (my words) but to successfully navigate this project through the necessary process so that it stands up against any environmental law scrutiny (Just think of Galway Outer Bypass being stalled for years as one of the environmental factors (bog Cotton ) was overlooked!

Notes :  Due to delay in the Catchment Model (TCD), there was a high risk to meet Eco field study.  Ryan Hanley developed a channel concept that allowed the majority of the Biodiversity, ecological sturdy to be done without missing a season (essentially a year!)  This allowed MM to have early understanding – come up with initial assessments ad to make sure we are not damaging vulnerable habitats

There was study done regarding the environmental constraints that potentially affect this development.

These constraints are built into any proposed development project and the role of the environmental consultants (Mott Macdonald) is ensure a really thorough study is undertaken to minimise the that this project won’t be scuppered by environmental issues at a later stage. (Think Galway outer bypass delay of > 7 years)

As this area is peppered with SACs then this is quite a complex part of the project and includes studies on :

As this is a flood-relieft project – From the constraints study, the main focus here is the biodiversity/ecology. The main risks found were:

In general, they are the key areas. There were studies done for other mammals also but nothing high-risk

Notes : DM stated that flood mitigation will offer more protection than the displacement of a few hedgerows. Feedback was that this was low risk.

Cuan Beo highlighted their concerns again for salinity affects in Kinvara Bay and that oysters cannot survive low salinity levels for long as it increases their stress and makes them more susceptible to disease.   SGFRC member Tom Fahy highlighted that there are risks to human lives and wellbeing by the levels of flooding in South Galway Catchment.  SGFRC Chair, David Murray reiterated that while this may be the wettest 2 decades in the past 300 years,  The South Galway communities should not become the dumping ground for excessive flood water run-off.  He highlighted that the Targeted Maximum flood levels were the vital contract to eliminating flooding threats to people’s homes and livelihoods while at the same time maintaining the integrity of the turloughs.

There has never been more data collected w.r.t. turlough monitoring and flood mapping in Ireland and much of this is in South Galway where many permanent monitors are being installed. 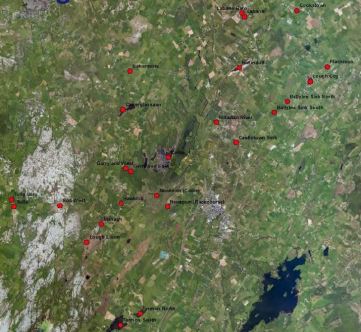 GSI are also using Copernicus Satellite data ( 4 photos in 6 days) to look at historical flood data (e.g.  2015/2016 floods have been captured for the entire country). These are Radar images and can see through cloud.

These images are being analysed to and approximate the Turlough boundaries. The accuracy is 10m but it can be possible to get accuracy by averaging the boundary.  With the LIDAR data is it is therefore possible to get very good accuracy of the change in Turlough Volumes – which is essential for the Catchment Model.  There is very good accuracy compared with the turlough monitors except in areas of heavy woodland where it is difficult to gauge flood boundary from satellite data.

This will also take Climate Change modelling into account.

There is no doubt that this is a very complex process.  A previous model developed South Galway Turlough networks was used as a based and then further developed into a flood analysis model.  The model was calibrated to achieve more accuracy by:

Currently the model is now exhibiting similar behaviour to real flooding events e.g. generally <0.5% error for majority of areas. This has taken a lot of work to get this accuracy.

Running historical rainfall figures, this model has successfully shown the main flood events over the past 30 years. This model will now be used by RyanHanley to understand 1:100 flood extend to feed into Cost-Benetif analysis as well as being used to model and assess flood alleviation scenarios with Ryan Hanley

Patrick used the model to assess impacts of increased run-off the Slieve Aughty Mountains. He assessed the forestry coverage in the 3  catchments and the effects of thinning, clear-felling and maturity of sites.

He simulated various scenarios where he smoothed the peak events over 24 hr, 36 hr and 48 hr and reduce levels (storage).    In general, the effect of rapid run-off while it definitely has an impact, the overall flooding effect on the lowland Turloughs was not deemed substantial.  This can be related to Mature forests >15 years have a dampening affect on flooding.  With what was described as a very unrealistic case (store flood peak for 2 days, the effect on Coole was to reduce peak flooding it by 70cm.

SFGRC stated that 70cm could mean a house flooding – Patrick highlighted that this 70cm was a very unrealistic case and was just there to give an indication – it was probably more likely a lot less. He did say there definitely has an affect but in the overall flooding of South Galway it substantial enough to merit investing in.

Conor Warner highlighted that the main basins provide the dampening effects.  An average of 8mm over 25 days is ok for Coole lake levels, but an average of 12mm over 25 days, there is serious flooding. This is the kind of timespan that we are looking at.  Conor also pointed out that we could blow out budget trying to manage the high-lands but we’ll still hit the same flooding scenarios. We need to invest in keeping the water flowing through the system and not letting it build up.

SFGRC summary :  I think this has shown us where our solution should focus.   We have seen the numbers that we need to reduce peak Turolough levels (2m-3m) and reducing mountain peak flows by 24-48 hours is not having this much impact so we need to see what  solutions we can have in the lowlands to manage levels (over several weeks). We saw in fact in, in Winter 2017 the flood levels rise with just continuous rain over several weeks.

We should not forget though that forestry felling has an clear impact so we need to ensure that this is managed properly and that the impact is mitigated.  SFGRC has worked with Irish Forestry Service and Coillte on a policy for the management of the Slieve Aughty forestry to minimize impact.

There was also a mention of a previous proposal where some portion of the the Owenshree could be diverted into the Aagard. Again, this was deemed a lower priority solution than keeping the water flowing through the Gort/South Galway lowlands.

The focus will be to now start using the hydrology model and running the 1000s year rainfall scenarios to understand the real one in 100 year flood event (there is speculation that we haven’t actually seen one yet) . 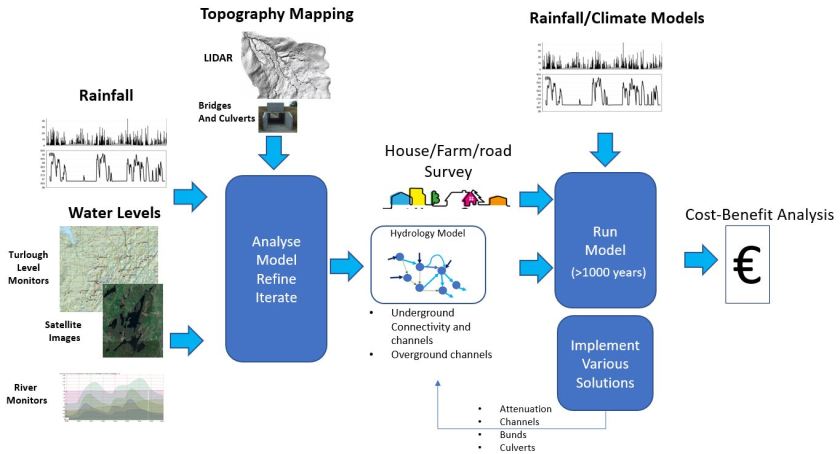 The consultants will then try different scenarios and measure these with the same data to test there efficiency and then try and match the cost and the environmental considerations.

Unfortunately, this level of analysis is more complex than anticipated and the feasibility study conclusion will be at least 8-9 months doing this analysis – Q3 next year (Sept-Oct 2019)  – However – the SGFRC would prefer that we get all the facts and accuracy we need here and develop the right solution rather than cutting corners and ending up with a sub-optimal solution.