In 8th January 2016,  I formed this blog because of my frustration with lack of understanding of our situation in South Galway from some comments on my South Galway Floods Facebook page. I wrote What do you expect … when you built on a flood plain?  in about 30 minutes in response to comments of the same name, published it and it had over 5000 reads within 24 hours.   It highlighted that there were homes 200 years old that were flooding for the first time and that the builders of this didn’t build on a flood plain. However through the mismanagement of the Slieve Aughty mountains, land reclamation and other factors have now added flood risk to areas which weren’t initially prone to flooding.

The sentiment at the time is that some local authorities where granting planning permission in areas that were liable to flooding.   There’s a recent development starting in Gort that has some people worried that they are building on a flood plain so lets take a very quick look at this.   The site in question is Ballyhugh and is a substantial development comprising of :

This is substantial development and it’s great to see this level of investment in development in Gort. My question – how have they considered flooding?

If we superimpose CFRAM maps (flood-risk management maps) from the Gort Local Area Plan 2013-2019,  we get the following approximation. 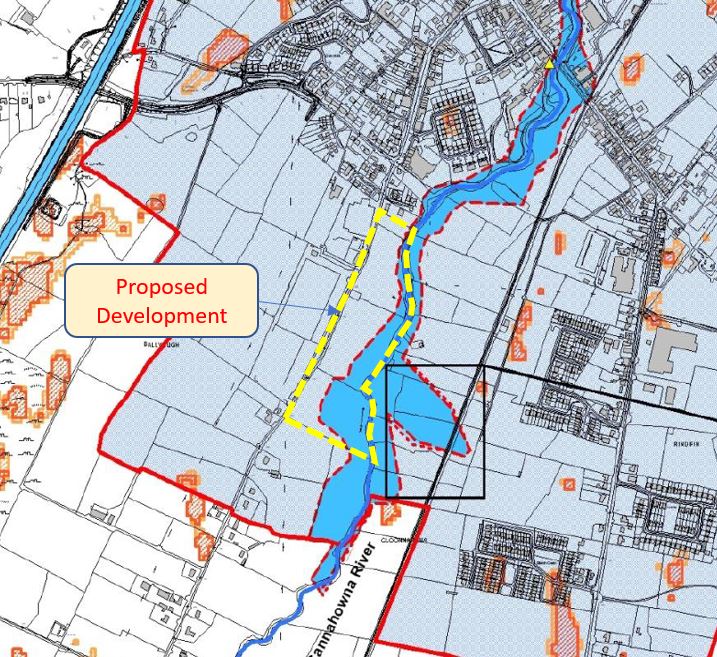 This flooding extent seems to be a 23.5-24.2m contour and if we not look at these contours in relation to the proposal we get this:

Now that looks real bad! However, it’s not as bad as that though.   That flood level is a 1 in a 100 year flood extent (happens on average once every 100 years) and it’s against the existing ground level.  The development plans include raising the new ground level as shown in the diagram below.

So, in theory, this is on paper looks fine. This is a 1:100 year flood extent and finished floor level there could be approx 15-20  houses is about 1m above this extent, which again, seems reasonable.     However, these flood extents are approximate and as we know the complexity of the hydrology of South Galway makes these numbers less accurate.

What concerns me is that while the developers did an initial flood risk assessment as a request for information – it didn’t seem trigger anything within OPW when it was first applied for.  This assessment was pretty thorough and was completed in March 2009 and gave some extent information as shown here. 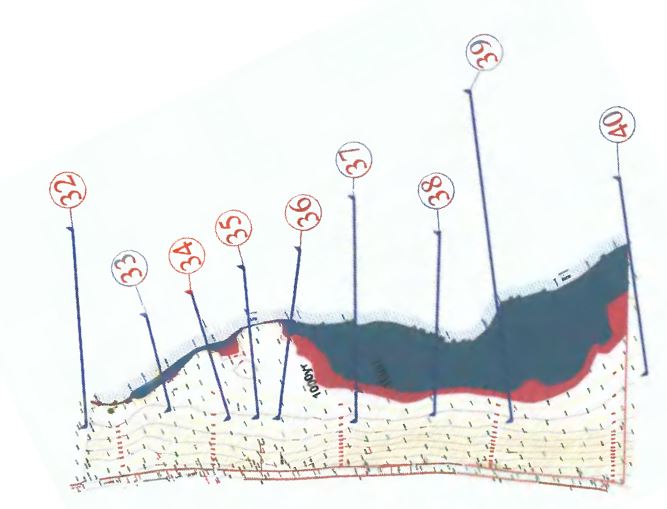 It also gave the recommendation that Minimum floor levels should be 25m ~about 1m above predicted extent – this was in line with OPW recommendations at the time of 500mm-600mm.

In fact we can see here in Winter 2009 water gathering on the site opposite St Colman’s Park in the proposed development site.

Another factor is that as this development is raising land around a river bed, will it have an impact – yes – the 2009 analysis said that 1625m3 would be displaced but was not deemed significant (about 48 seconds worth of peak flow) .  Maybe in the overall catchment this is deemed negligible but when downstream is given responsibility for taking up this and increased flows through Gort and other areas – they all add up but who is actually adding all of these up? It’s flooding by a 1000 cuts.

This kind of development is good for Gort and South Galway and from a flood risk perspective,  it does seem to still have a 1m buffer zone which is portrayed as enough –  but is this realistic? We should get more realistic flood relief extents at the end of the South Galway/Gort Lowlands Flood Relief feasibility study (End of 2019) and it will be interesting to see if this impacts on on the flood risk of this proposed development.

Dave is a 'Solution Architect' with a hi-tech company called Arm. He is deeply involved in his community and his two key focuses are based around the rivers of South Galway. He is an activist in getting flood relief solutions in place for South Galway after decades of empty promises and also is also helping to progress a beautiful Gort River Walk for the South Galway/North Clare communities. View all posts by David Murray